With the Super Bowl and the College Football Playoff in our rearview and March Madness approaching, now is a prime time to remind ourselves that rankings are the human brain’s favorite catnip.

This is hardly news to you, especially if you’ve ever clicked on an article with a headline that began “Top 10 …” And if those lists were something like “Top 10 Rappers of All Time,” “Top 10 Things to do in Austin,” or “Top 10 Ways to Reduce Stress,” you risked little by detouring down one of the Internet’s favorite rabbit holes.

But a top 10 list involving colleges isn’t just another benign detour, especially if you’re a prospective student. These are lists designed to trick your brain into believing that a complex decision can be a simple one.

And your brain desperately wants to believe that. (In fairness, your brain has a lot going on.)

System 1 thinking involves associating new information with existing patterns, or thoughts, rather than creating new patterns for each new experience. System 1 also produces the quick, gut reactions and decisions that govern most of our lives — like (gulp!) returning to college.

In this short video, Kahneman discusses the perils of assuming you’re in System 2 thinking when you’re really in System 1 — essentially, being overconfident. Wars, business failures and lawsuits and other calamities have been the result, Kahneman says, of overconfidence, or people’s assumption that they were expert enough about a situation to apply fast, System 1, thinking to it.

Tacos, Bottled Water and Colleges: One of These Is Not Like the Others

Which brings us to college rankings. While the brain may be exhausted by System 2 thinking, and prefer shortcuts like rankings (which enable System 1 thinking), choosing a college really doesn’t lend itself to that.

In our lifetimes, most of us pick a college once or twice, which is hardly enough experience to claim that we’re expert college pickers. And, most of us who were college students question some aspect of our decision making, with a recent Gallup poll showing that the majority of Americans (51%) who went to college would change their degree type, institution or major.

College experiences are not rankable commodities like bottled water or tacos. Heck, despite 20 years of trying, we can’t even rank their football teams without raging controversy. And, unlike colleges, choosing one taco doesn’t mean you can’t choose one or two additional varieties.

Picking a college rivals buying a house for the demands placed on your complex reasoning skills. Majors offered, distance from home, cost, campus involvement, employment prospects, services relevant to your life and logistics needs (transportation, childcare, veterans services, accelerated programs, etc.) are just a few of the factors that place college decisions squarely in the realm of Kahneman’s “slow thinking.”

But still these “top colleges” lists clamor for your clicks, probably because a near-bottomless well of advertising and subscription dollars exists to pay for them.

“None of these things are in the rankings.”

Does the nebulous “prestige” these lists are rooted in have any value? Perhaps — at least to people who graduated from schools the lists deem prestigious. Do employers care? Not as much as they care about the real-world accomplishments you acquired while earning that degree or afterward. We could debate prestige endlessly, which is probably what the publishers of those rankings want us to do via comments, Twitter, Facebook, etc.

“It’s about potential, but it’s not about actual. And so we are judging all of these universities and publishing these rankings based on our potential to do good perhaps, but not on whether we are doing any good, whether we are changing any student’s lives, whether we are helping a student learn, became a more creative thinker, to be more prepared for the democracy that she or he is going to be a part of, whether the students can get a job. None of these things are in the rankings.”

But for the adult learner trying to keep her home, or afford a new one by increasing her value in the workforce, these traditional ranking systems often punish schools for strengthening their commitment to nontraditional learners. It would be hard to find a more glaring example of this than the 30-spot tumble suffered by Georgia State University, which has been a national model for closing the equity gap and raising graduation rates among non-traditional students and minorities.

There are many reasons for the distorted view of adult-friendly schools in rankings. For example, U.S. News prizes spending per student, a stat that schools can juice by accepting wealthier students, who need less financial aid, and who are often traditional students with family funding. Politico notes that this practice “free[s] up money to spend on things U.S. News rewards, like hiring more faculty to keep class sizes small.” High average faculty salaries also weigh heavily in U.S. News’ rankings methodology. 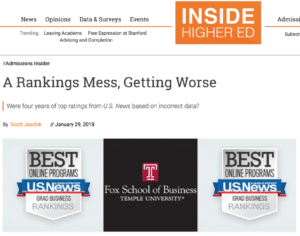 And all of this assumes that colleges accurately report their own data, something that has burned rankings services repeatedly. Recently, U.S. News was forced to remove the #1 ranking for Temple University’s online MBA program, which it had awarded Temple for four straight years, based on standardized test data that Temple appears to have fabricated.

Sure, small class sizes, comfortably compensated faculty and high standardized test scores — if accurately reported — can be positive indicators. But on a list of investments that would most benefit you as an adult returning to college, it might be hard to prioritize them above things like veterans services, alumni mentoring, access to faculty, hands-on learning with potential employers, childcare, accelerated programs, etc.

Smith says that adults considering a return to college should find look for a school that:

“We’re proud that our rankings continue to rise, but for many of our applicants, a key factor is that we believe in them and we’re committed to helping them succeed,” said Jason Murray, Notre Dame de Namur University‘s Vice President for Enrollment.

“It’s the small class size, the attention from faculty, and the financial aid that attract our students. Equally important is a campus culture that understands the particular needs of adults returning to school.”

Looking For What the Rankings Miss

The decision to return to college — either as an undergraduate or in pursuit of a masters — is a bold one. According to recent studies, barely a third of the adult learners who re-entered college between 2005 and 2008 completed their degree. That’s 27% lower than for first-time students.

If you’re determined to be one of those who cross the stage with a diploma in hand, be aware that most of the factors that can keep you from doing so pop up outside of the classroom:

None of this is meant to discourage you. Rather, it’s to highlight reasons and ways to look beyond rankings to find the right school for you, not just some mythical best school.

“The bottom line is that we want our students to succeed, which means earning their diplomas and moving into successful careers,” said David Cordle, provost and vice president for academic affairs at Emporia State University.

“Making that happen includes offering courses when, where and how our students need them and helping them create their own online degrees to complete credits they might be missing from an earlier college career. These practices aren’t quantifiable through rankings.”

FREE INFOGRAPHIC: Making the Most of Your College Experience

Do you want a good return on investment from your college degree? Download your copy today and learn how to make the most of your college experience.

You have successfully downloaded your copy! 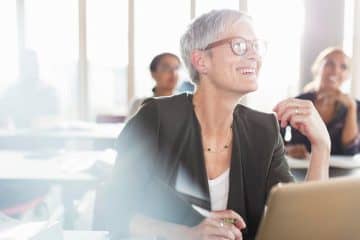 How to Choose a Major as an Adult Student

Ana-Marcela Lopez / Abound: Finish College »
Read this guide to help you choose the right major for you. We've provided detailed steps to aid you in finding a specialized area of study for college.
Read more 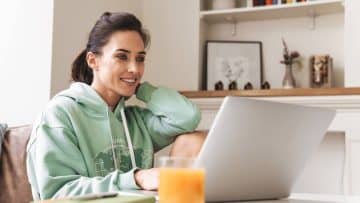 How to Choose the Right Online Bachelor’s Degree Program

Ana-Marcela Lopez / Abound: Finish College »
Thinking about enrolling online? Read on to get a better idea of how to choose the online bachelor’s program that works best for you.
Read more 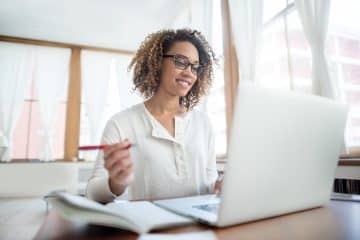 How to Market Your Online Degree to Employers